A crowdfunding initiative has been launched in India’s capital to help overworked undertakers that earn less than $7 per day.

As corpses from India’s COVID-19 crisis pile up, crematorium staff are working day and night to burn, bury and perform end-of-life rituals for an endless stream of pandemic victims.

“For every one body that I perform last rites for, there are a dozen more waiting,” said 30-year-old crematorium worker Ram Karan Mishra.

“There is no social distancing, no sanitisers. It is a critical situation here.” 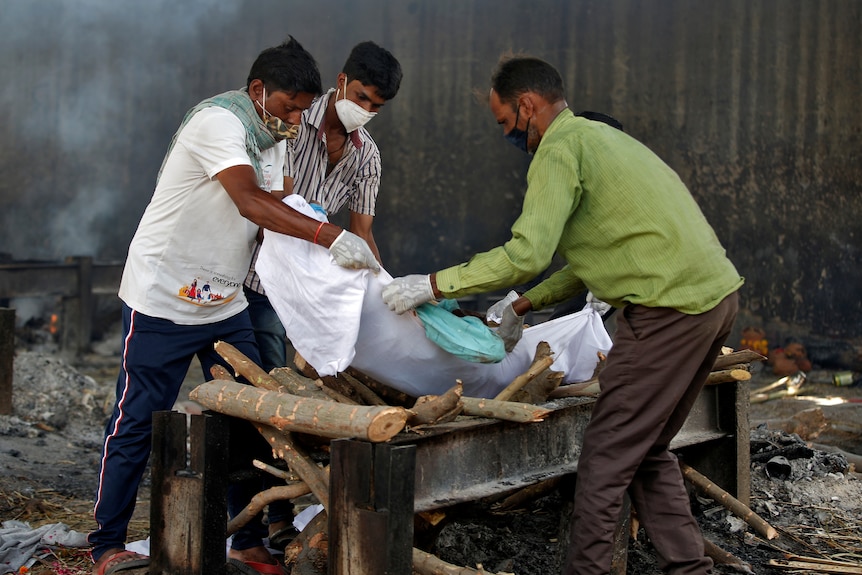 What began as a modest initiative distributing food to 100 workers at a single cemetery turned into a slick enterprise with 1.5 million rupees ($26,000) raised in 48 hours.

Ms Ghosh, who has no crowdfunding experience, said she was learning on the job and now had dedicated teams to run logistics, operations and social media accounts.

Her teams have reached out to workers at eight crematoriums and graveyards — all in less than a week.

“They are clearly worn out. The pyres are so hot, and it is really tough for anybody to stand in the middle of that the whole day. There is a lot we don’t see,” Ms Ghosh said.

India accounted for nearly half the COVID-19 cases reported worldwide last week, according to the World Health Organisation (WHO), with the country’s 24-hour death toll breaking successive records.

The WHO said in its weekly epidemiological report on Wednesday that India accounted for 25 per cent of global deaths reported in the past week, raising the total death toll over 230,000.

Space to play or pause, M to mute, left and right arrows to seek, up and down arrows for volume. The Ghazipur crematorium, one of Delhi’s busiest, now takes in 100-150 bodies a day, up from about eight a day pre-pandemic.

Working in the scorching heat and dust, Ghazipur crematorium worker Mishra stood by the flames of a burning pyre chanting prayers believed to release the souls of the deceased.

“We do this as our duty to the society. Our country is going through a big crisis. If we don’t do it, who will?” he said. 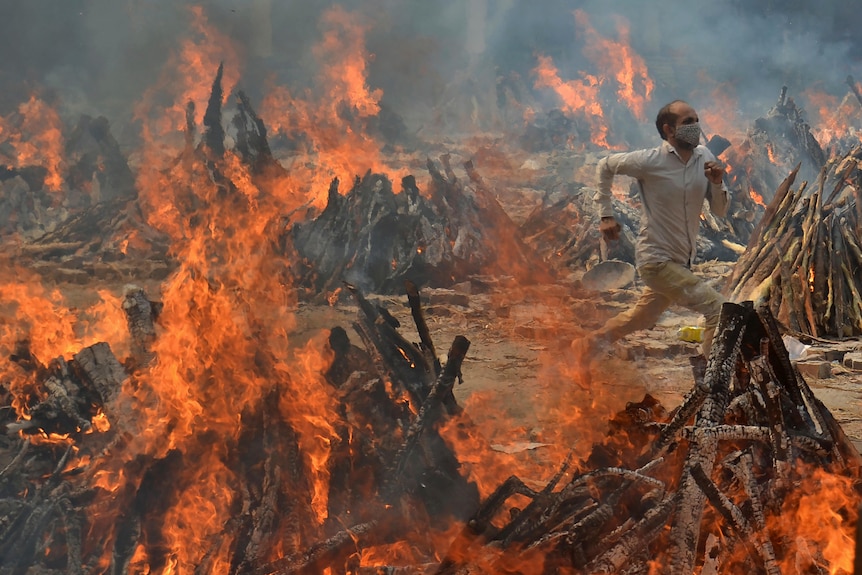 As Indians of every class hustle for oxygen, ventilators and beds for their sick, the support for diggers is a rare nod to thousands of low-caste workers who feel trapped and overlooked.

“I have sent my family back to our village. I live here now. There is no time. When the food came yesterday, it was a relief for us,” he said, before rushing to perform yet more last rites.

Most crematorium workers come from India’s marginalised communities and often inherit a job that nobody else wants.

Indians rely on them yet few appreciate them or understand the dangers that are now routine, campaigners said. “They are not being taken care of. They have no job security or social security. They are invisible to the world,” said M Shankar, state convener of Ambedkar Dalit Sangharsha Samiti, a non-profit working for the country’s marginalised Dalit community in southern Bangalore city.

“They have no recognition despite their work in the pandemic. I have not seen a single initiative for their welfare.

“If not for them, who will do this work?” “This spreads a message of hope that people are willing to help each other in such unprecedented times,” said Mayukh Choudhury, chief executive officer of Milaap.