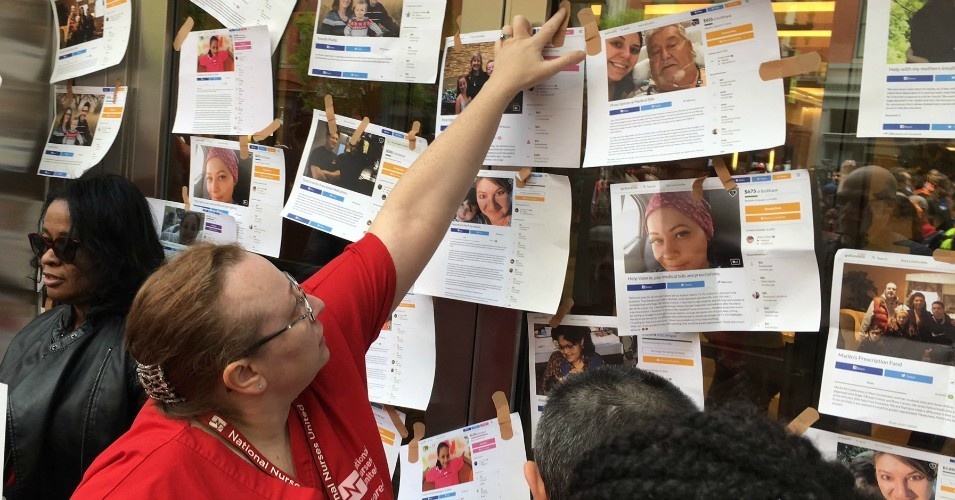 An estimated eight million people in the U.S. have started a crowdfunding campaign to help pay for their own or a member of their household’s healthcare costs, according to a survey released Wednesday.

Fifty million Americans have donated to such fundraising efforts, the survey showed.

“As annual out-of-pocket costs continue to rise, more Americans are struggling to pay their medical bills, and millions are turning to their social networks and crowdfunding sites to fund medical treatments and pay medical bills,” Mollie Hertel, senior research scientist at NORC, said in a statement.

“Although about a quarter of Americans report having sponsored or donated to a campaign, this share is likely to increase in the face of rising premiums and out-of-pocket costs,” Hertel continued.

We live in a barbaric society at the mercy of billionaires https://t.co/kARJZZbFHj
— StrikeDebt (@StrikeDebt) February 19, 2020

Sen. Bernie Sanders (I-Vt.), a 2020 Democratic presidential candidate, tweeted in response to the survey that “no one should have to beg for money to get the health care they need in the richest country on Earth.”

“Enough is enough,” Sanders wrote. “Medicare for All now.”

The survey found that 60% of Americans believe the government—not charities, family members, or friends—has a “great deal or a lot of responsibility” to provide “help when medical care is unaffordable.”

“I have to presume that most crowdfunding campaigns fail,” tweeted single-payer advocate Tim Faust. “So here’s the future of American healthcare: costs keep going up; they keep being pushed onto patients by insurers; whether you drown in medical debt is a function of luck, popularity, and how much sympathy you can garner.”

As she introduced the House version of the Medicare for All Act of 2019 last February, Rep. Pramila Jayapal (D-Wash.) lamented that “GoFundMe is becoming one of the most popular insurance plans in the country.”

“It comes down to a profit-making motive that is baked into a system—a system that puts profits over patients,” said Jayapal.