the in-production Star Trek: Voyager documentary project from David Zappone and the 455 Films team is about to move into its next stage: a crowdfunding campaign to build funds and complete the project.

Over the last several months, Zappone — who produced and co-directed What We Left Behind: Looking Back at Star Trek: Deep Space Nine — has quietly been tweeting out minor updates on the project:

Sorry to have been quiet, but we did another great day of interviews for our upcoming @StarTrek #voyager documentary. To be honest, it will be tough to top @DS9Doc. So I’m asking the fans, what do you want to see in our 25th Anniversary #StarTrekVoyager documentary?

We had a production meeting today, and reviewed all of your suggestions for our #startrekvoyager 25th Anniversary documentary. I think this will be our best one yet. @StarTrek

…and as the new year begins, the project is warping into its next phase as Voyager co-star Garrett Wang lead an announcement video setting the start date for the upcoming crowdfunding campaign for a March 1 start.

There’s a limited amount of information available regarding the crowdfunding campaign at this time, but more detail is expected to be released over the next few weeks, including the perks associated with crowdfunding donations — but as soon as there’s more to share, you can be sure we’ll update you here!

In the meantime, you can watch for other updates at documentary website, or follow the creative team on , on , or on .

Order Star Trek: Voyager -A Vision of the Future today! 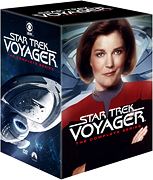