Here’s how bitcoin could soon be worth $146,000 according to JPMorgan – MarketWatch

Bitcoin’s nearly nonstop climb to new records has drawn the attention of Wall Street like few other securities in recent memory.

The world’s No. 1 digital asset was recently trading at around $32,000 in Tuesday action, at last check, but the team at JPMorgan Chase
JPM,
,
make the case that the blockchain-backed cryptocurrency could be valued at $146,000 in the not-so-distant future , if it can continue to draw demand away from gold buyers, as the researchers at the bank think is already happening.

The analysts point to outflow from gold-pegged exchange traded funds, or ETFs, and inflows into a digital-currency focused trusts sponsored by Grayscale, for example, as part of the evidence pointing to increased use of bitcoin as a gold-like security, which would help to drive its price further into the stratosphere.

“Bitcoin’s competition with gold has already started in our mind as evidenced by the more than $3 [billion] of inflows into the Grayscale Bitcoin Trust and the more than $7bln of outflows from Gold ETFs since mid-October,”(see attached chart): 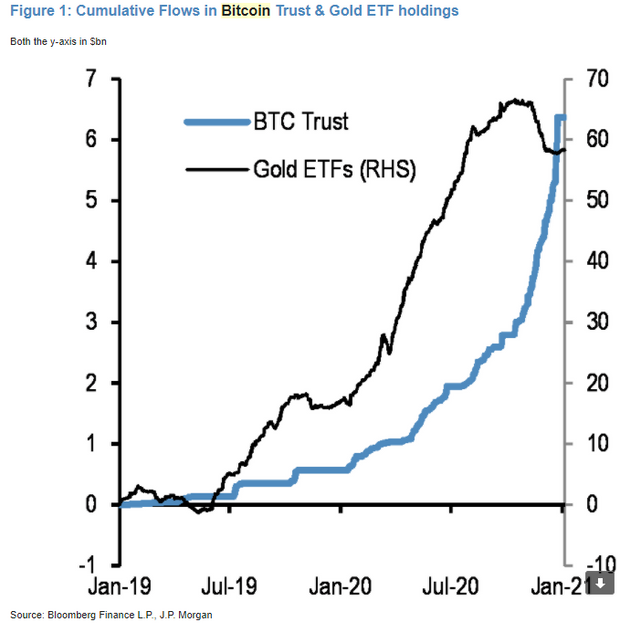 JPMorgan says that by one measure, bitcoin currently consumes 3.4 times more risk capital than gold and over 5 times more, if comparing the Grayscale Bitcoin Trust versus
GBTC,

would currently have to rise by 4.6 time from its current market capitalization of around $575 billion — outstanding coins in circulation multiplied by price per unit — to imply a bitcoin price of $146,000 “to match the total private sector investment in gold via ETFs or bars and coins,” wrote JPMorgan’s strategy team, including, Nikolaos Panigirtzoglou, Mika Inkinen and Nishant Poddar.

The researchers also said that they expect interest in bitcoin to come largely from younger investors.

“There is little doubt that this competition with gold as an ‘alternative’ currency will continue over the coming years given that millennials will become over time a more important component of investors’ universe and given their preference for ‘digital gold’ over traditional gold,” the research team wrote in the research reported dated Monday.

The one major impediment to bitcoin’s price rise and one that is likely to be make its price moves fragile is its volatility.

Investors have been attracted to the narrative that bitcoin could act as a store of wealth amid rampant central-bank money printing in the past year to bolster an economic recovery from the coronavirus pandemic.

recently allowed users on its platform to purchase bitcoin ,  as well as other sister cryptos like Ethereum’s Ether coins
ETHUSD,
,
Bitcoin Cash
BCHUSD,

GOLD,
,
based on the most-active gold futures contract, for in January. Meanwhile, the Dow Jones Industrial Average
DJIA,
,
the S&P 500 index
SPX,

and the Nasdaq Composite
COMP,

are all lower at this point in the year.