Digital Currencies and Blockchain in the Social Sector

If you have any interest in recent events, you can’t help but notice bitcoin’s meteoric rise in value. Just over a year ago, on January 1, 2017, one bitcoin was worth about $1,000; by the end of December 2017, its value had soared to more than $14,000. The digital currency has also suffered from wild swings, however, losing a third of its value in July 2017,  then reaching a high of nearly $20,000 in late 2017, and then falling briefly below $10,000 on January 17, 2018. But the technology at the heart of bitcoin and other digital currencies (also called cryptocurrencies) may, in fact, have the potential to drive profound social impact and transform the social sector along the way.

These currencies are built on a breakthrough technology called “blockchain.” A blockchain is essentially a digital ledger of online transactions linked and secured by cryptography, and stored on a peer-to-peer computer network. Updates occur in real-time—in blocks (or groups) of transactions—without interference from or control by a central authority. A blockchain doesn’t allow users to change completed transactions, and all users can see the transaction history. This technology is exciting, because the transparency and security of data stored in a blockchain facilitates trust and efficiency between users in an unprecedented way.

Though many people associate blockchain technology solely with cryptocurrency transactions, it can be used to record any type of exchange—for example, property sales, audit data, voter identification, or supply chain origin. Blockchain can also enable automated governance or regulatory compliance—for example, it could allow people with solar panels to automatically sell electricity to their neighbors. In terms of its development, blockchain is in its early days. Only 0.5 percent of the world’s population is using blockchain, while more than 50 percent of the population has access to the Internet. And much like the Internet, we expect to see an explosion of users and usages over time.

Using Blockchain in the Social Sector

The application of blockchain and digital currencies in the social sector is just getting started, but at least five prominent use cases have already emerged:

To expand fundraising opportunities, a number of charities and foundations are accepting bitcoin and other cryptocurrency donations from donors directly. They exchange cryptocurrency donations through an online wallet for dollars or other fiat currencies at the going exchange rate. In addition, a handful of organizations have created customized “charity coins” to raise money for specific nonprofits or social impact projects. Donors can buy Clean Water Coins, for example, to help fund the work of the NGO Charity:Water. Other examples include Root tokens, issued to fund anti-poverty work projects, and impak coin, created as an impact investing mechanism. To date, such specialized charity coin offerings have raised anywhere from a couple of thousand to more than a million dollars each.

Digital currencies and blockchain have also spurred a movement for greater transparency in aid. For example, the BitGive Foundation has launched an initiative called GiveTrack, which allows bitcoin donors and the public “to trace nonprofit transactions on a public platform in real time to see how funds are spent, ensure they reach their final destination, and track the results generated from contributions.” The United Nations World Food Program (WFP) conducted another experiment in aid transparency, providing Syrian refugees based in Jordan with digital currency vouchers to trade at selected markets. WFP used the platform to successfully transfer $1.4 million to more than 10,000 people, eliminating the dangers of carrying cash, and gave the organization a more effective and less expensive method for distributing and tracking payments.

These new applications are even supporting private sector charity donations and tracking. China’s e-commerce conglomerate, Alibaba, has developed a unique blockchain donation system called Ant Love. Established last year, Ant Love can record the donations from any of Alibaba’s 450 million users, allowing them to donate to various charitable groups and NGOs. The system also lets donors track their transaction histories, and better understand where and how the organizations they fund are using their money.

Some organizations are using blockchain technology to reduce the cost of remittances transferred across borders by migrant workers, which total about $440 billion annually—nearly three times the amount of international aid provided to developing countries each year. Currently it is estimated that at least $32 billion in remittances is failing to reach recipients, due to high transaction fees associated with sending and receiving money internationally. 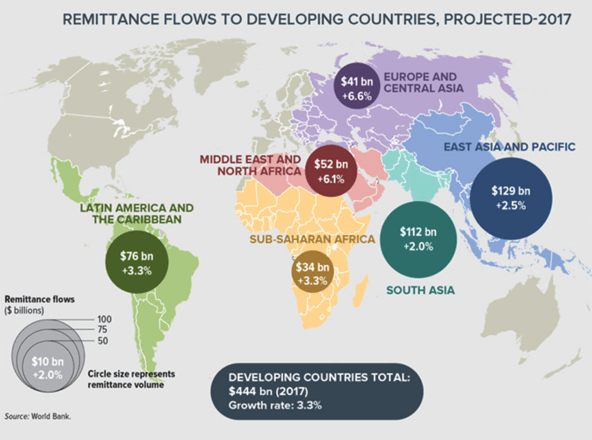 (Image courtesy of the World Bank)

The remittance service Abra claims to lower transaction fees by 90 percent. Already active in 155 countries, Abra converts money into bitcoin, transfers it across its blockchain platform, and settles it in a local currency on the other end. Anyone—including the unbanked—can make a transfer via smartphone.

Other services like BitPesa and Rebit also use blockchain technology and bitcoin, creating affordable global remittance systems. Using BitPesa’s remittance platform, for instance, transaction fees for individuals and businesses range from 1 to 3 percent, as compared to the up to 20 percent charged by established money transfer companies. In addition, a transfer that might normally take up to a week can occur in one day.

According to the United Nations, one in every five people globally lacks a legal identity, and the rates may be even higher for refugees, who often have to flee suddenly. The World Identity Network and Humanized Internet project can store identifiers such as birth certificates and university degrees on a blockchain, in the form of distributed digital lockboxes. Users can keep their information private and secure, but also give permission for anyone to access it anywhere in the world.

Meanwhile, Project Amply is building a digital identity and subsidy management system on the blockchain for schoolchildren in South Africa to replace an outdated paper system. Children (and their guardians) privately own and control their digital identity and personal data. The system tracks the delivery of development services, and investors and service providers can use the data to better target their support. It also saves administration time and costs, and provides previously unavailable information about how and where schools and social service providers are delivering services.

Another groundbreaking use of the blockchain is for securing land ownership rights. Proof of land ownership is a challenge in many parts of the developing world, where inequalities in wealth and power relations makes the rural poor and others less able to establish their property rights, and fend off land grabs by governments and corporations. One organization, Bitland, is piloting a project in Ghana to provide services that allow individuals and groups to survey land and record title deeds on a blockchain, thus providing a permanent and auditable record. Bitland also acts as a liaison with the government to help resolve disputes.

Several governments, including those in Dubai, Estonia, Georgia, and Sweden are making early forays into blockchain-based approaches to securing property rights.

Government and civil society can also leverage blockchain technology to strengthen democratic processes and participation. Blockchain systems such as Ballotchain can manage online elections with secure and anonymous voting that participants can verify at any time. The system ensures that voters cannot vote twice or commit electoral fraud, thus ensuring the integrity of election processes.

Another interesting application of blockchain in the governance space is peer-to-peer voting (not through governments) and the ability to transfer one’s vote to another trusted party anywhere. A blockchain-based app called Sovereign, is one such enabler of so-called “liquid democracy.” The creators of the tool, Democracy Earth, see blockchain as an opportunity to establish a new form of global governance that transcends national borders and fully establishes democracy as a universal human right. This wishful thinking is already in play through a blockchain-based nation state called Bitnation.

Follow My Vote is a startup using distributed ledgers to run voting processes and prevent identity theft. One of the significant advantages of voters using blockchains like the one underlying Follow My Vote is that users can verify voting choices at any point in time.

In the environmental arena, new blockchain-supported supply chain management systems, which are transparent but cannot be tampered with, can track products from the farm to the table, and show whether or not a food product is organic or Fair Trade. The startup Everledger has uploaded unique data on more than 1.6 million diamonds on a blockchain to determine the provenance of diamond products and help control the flow of “blood diamonds.”

Despite the promising nature of blockchain, it is still a young technology and presents a number of challenges. For one, it relies on complicated authentication algorithms and cryptography. And while users do not need to be blockchain experts, in the same way that browsers and applications help users engage with the Internet, tools based on the technology sorely need more human-friendly interfaces. Few are truly user-friendly and ready for large-scale adoption.

In addition, the application of blockchain to social challenges is occasionally over-hyped, and solutions are sometimes chasing problems, with technologists rather than sector representatives driving development. As a result, social impact organizations and those they serve are sometimes taking a back seat in determining the relevancy and appropriate application of the technology. Even when the social sector takes the lead, they may not have the resources or technical skills to bring their ideas to fruition.

Another challenge comes from the immutable nature of blockchain. If a disagreement arises between two parties involved in a transaction, there is no way to go backward; modifications require that the network create an additional record (or block) to confirm a change. If individuals cannot agree on a change, they are stuck with the original agreement, forever. For example, what happens if a blockchain-based land deed transferred from a landowner to a poor farmer inadvertently fails to include a portion of the parcel being exchanged? If the landowner refuses to make changes to the agreement, then there would be no recourse for the farmer. This is the downside of a lack of intermediaries, a clear governance structure, and a fully human-integrated system. Clearly there is a need for more standards, rules, and best practices.

Finally, for social sector organizations utilizing bitcoin and other digital currencies, the market is highly volatile and largely unregulated. It is not unusual for cryptocurrencies to swing 10 percent or more in value in a single day. Anyone active in the cryptocurrency arena needs to have a strong stomach for risk, particularly those relying on stable funding streams.

While we would be well-served not to get too swept up by the hype, NGOs and philanthropies should begin learning more about blockchain’s unique capabilities and help shape the field. There are many more potential opportunities than the ones mentioned above, including the use of blockchain for impact monitoring and measurement. These applications and others could help remake the field and provide powerful new benefits to both organizations in the social sector and their beneficiaries.

We already see significant investment of time and resources by a wide range of organizations. These include the Bill and Melinda Gates Foundation, Unicef, the World Bank, private companies like Consensys, and collaboratives like the Blockchain for Social Impact Coalition. The combination of large-scale interest and investment​ will drive further development and innovation in the sector.

One important next step is the creation of a central body to help surface new solutions, and guide blockchain and digital currency application in the social impact sector. There are also many questions to answer about how blockchain will intersect with the Internet of Things and artificial intelligence (a whole other conversation). While we should encourage experimentation across the board through the usual innovation labs, hackathons, investments in social entrepreneurs, field-based projects, and collaborative-building, the field could also benefit from a coordinating body. Ultimately, we need to devise new standards and best practices so that we can better infuse the human factor into new technology solutions that hold tremendous potential to address social and environmental issues. Fortunately, the building blocks are already there.